The Early Role of Women in Chàn Buddhism 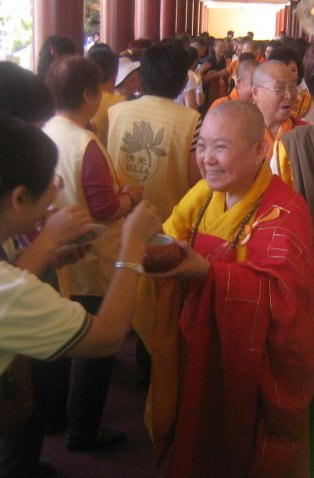 A little-known fact has recently come to light, Dàhuì was the first Chàn Master to have an officially recognized Female Lineage Holder, thereby establishing a precedent that seems to have been overlooked by subsequent generations of Chinese Chàn Teachers.

​Miàodào Chánshī was also known to her contemporaries and in subsequent genealogical histories as Jiguāng Dàshī (Great Teacher Light of Concentration). Furthermore, she was the first person of either sex to experience a great awakening using the Huàtóu method under the guidance of the founder of Kānhuà Chàn (kongàn introspection) practice in the Línjì Chàn lineage, Dàhuì Zōnggăo. As a result of her experience, she became Dàhuì's actual first dharma heir; an important teacher of women and men, and a participant in the early Southern Sung revival of Línjì. She and her teacher Dàhuì blazed the way toward a more widespread acceptance of women Chàn teachers as lineage members within a Chàn community.

In the Five Mountain Zen Order two of our root teachers, Zen Master Seung Sahn and Ven. Dr. Thích Thiên-Ân, were also progressive Chàn Masters of the 20th Century. Both of these teachers were steadfast in their direction of equanimity and teaching. They both ordained women as well as giving them Dharma Transmission, they both gave Teaching Authority to young people. And Zen Master Seung Sahn as well as a Dharma Heir of Ven. Thích Thiên-Ân openly ordained and gave transmission to at least one openly LGBT community member each.

Ven. Thích Thiên-Ân ordained married men and women, and Zen Master Seung Sahn decided to make a special class of ordination for married practitioners, which he called the Bodhisattva Monk. We continue to make strides in our direction of non-discrimination, and the evolution of Chán Buddhism as it moves forward into the 21st Century Western world. We will be criticized and scorned by some, and to quote the words of the Founder of Daoism, Lǎozi, “If you seek for the approval of others, you become their prisoner.”

We don’t make changes idly or indiscriminately, rather we look within ourselves to ask ourselves what we feel is fair and just and compassionate. We will make mistakes and in the manner of a Bodhisattva we always try to make them correct when we realize the error of our ways.
photo credit: Thetruthaboutfgs - Transferred from en.wikipedia to Commons. Cropped version. "Venerable Tzu Chuang, founder of Hsi Lai Temple, in an alms begging round during Sangha Day, 2006"