The word "zen" comes from the sanskrit "dhyāna", which refers to a meditative state of mind and today is commonly translated as meditation. When Buddhism traveled east to China, the word dhyāna was pronounced in Chinese as chan. From China, Buddhism spread to Vietnam as thiền, to Korea as seon and Japan as zen. Because the practice was introduced to the US by Japanese teachers toward the end of the 19th century, the word "zen" has become firmly rooted.

Zen is a practice of meditation and action that emphasizes self-discipline, insight into one's true-nature and the expression of this insight in daily life, particularly for the benefit of all living beings. It is a practice that frees us to live compassionate, healthy and energized lives. The practice of Zen leads us to examine our true-nature by asking such questions as "Who am I?" "What is this?" "Why am I here?"  These questions directed inward, are balanced by direct understanding through the senses and working with a trained teacher.

The way of Zen is very simple. It is a practice of how one keeps one's mind, moment after moment after moment.  The practice is compatible with any religious faith, as well as with none at all. Zen practice urges us to be free and flexible with our engagement with life, which also helps to loosen our grip on ideas, beliefs and concepts. We don't encourage a special mind state. It is not a "tuning out" or "blissing out." Rather, Zen encourages "tuning in" and realizing the miracle of being alive, right this moment. It teaches us to be non-judgemental and grateful for all that we encounter.

Zen is the great work of life and death.

​To put it another way, our aspiration is to wake up to our true nature, so that from a boundless wellspring of compassion that springs forth from our mature practice, we may live within a life of service to others, or through the second Great Question, “How may I help you?” 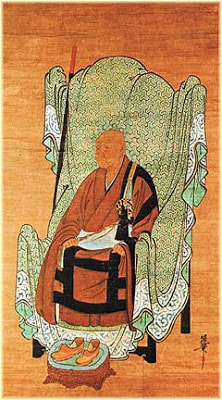 In the Five Mountain Zen Order, we trace our roots back to Dàhuì Zōnggăo and teach directly out of the Kānhuà Chàn method of huàtóu and kongàn study. Master Dàhuì realized liberation at an early age, it is estimated that he was either 26 or 27 and was initially assigned as the principle teacher to the Lay Students who were practicing under the tutelage of Chán Master Yuánwù Kèqín.

Because of this, Dàhuì wrote many of his treatises with the Lay Student in mind. It is because this great teacher stepped out of the normal function of a monk and spent his time almost exclusively teaching Kongàn’s as well as educating the Female Monks and Lay Students in his early years of practice, that we today have a methodology that can work within the life of a householder.

​Chán Master Dàhuì Zōnggăo said:
​“To realize awakening, it is not necessary to abandon family life, quit your job, become a vegetarian, practice asceticism, flee to a quiet mountain top, or enter a ghost cave of dead Chán to entertain your subjective imaginings. If you have been practicing quiet meditation but your mind is still not calm and free when in the midst of activity, this means you haven't been empowered by your quiet meditation. Furthermore, if you have been practicing quietude just to get rid of agitation, then when you are in the midst of agitation, the agitation will disturb your mind just as if you had never done any quiet meditation.
When you are studying Chán, as you meet with people and deal with situations, never allow erroneous thoughts to continue. If an erroneous thought arises, immediately focus your attention on this very moment and cut off your thinking. If, however, you just follow your thoughts unhindered, this will not only make it impossible to have any insight into your own true nature it will also make you a fool.
Good and bad come from your own mind. However, what do you call your own mind, apart from your actions and thoughts? Where does your mind come from? If you really know where your own mind comes from, boundless obstacles caused by your own actions will be cleared all at once. After seeing that, all sorts of extraordinary possibilities will come to you without your seeking them.”

The Early Role of Women in Chàn Buddhism

A little-known fact has recently come to light, Dàhuì was the first Chàn Master to have an officially recognized Female Lineage Holder, thereby establishing a precedent that seems to have been overlooked by subsequent generations of Chinese Chàn Teachers.
​
In the Tenth Century ACE, for the first time in an official Imperially Sanctioned Chàn Genealogical History, two Sung female monks were recognized as Masters of Chàn. Also, what they were doing, teaching, and writing was officially recognized as Chàn Buddhist activity, teaching, and writing in China. Their names were Miàozǒng Chánshī and Miàodào Chánshī.

Miàodào Chánshī was also known to her contemporaries and in subsequent genealogical histories as Jiguāng Dàshī (Great Teacher Light of Concentration). Furthermore, she was the first person of either sex to experience a great awakening using the Huàtóu method under the guidance of the founder of Kānhuà Chàn (kongàn introspection) practice in the Línjì Chàn lineage, Dàhuì Zōnggăo. As a result of her experience, she became Dàhuì's actual first dharma heir; an important teacher of women and men, and a participant in the early Southern Sung revival of Línjì. She and her teacher Dàhuì blazed the way toward a more widespread acceptance of women Chàn teachers as lineage members within a Chàn community.

In the Five Mountain Zen Order two of our root teachers, Zen Master Seung Sahn and Ven. Dr. Thích Thiên-Ân, were also progressive Chàn Masters of the 20th Century. Both of these teachers were steadfast in their direction of equanimity and teaching. They both ordained women as well as giving them Dharma Transmission, they both gave Teaching Authority to young people. And Zen Master Seung Sahn as well as a Dharma Heir of Ven. Thích Thiên-Ân openly ordained and gave transmission to at least one openly LGBT community member each.

Ven. Thích Thiên-Ân ordained married men and women, and Zen Master Seung Sahn decided to make a special class of ordination for married practitioners, which he called the Bodhisattva Monk. We continue to make strides in our direction of non-discrimination, and the evolution of Chán Buddhism as it moves forward into the 21st Century Western world. We will be criticized and scorned by some, and to quote the words of the Founder of Daoism, Lǎozi, “If you seek for the approval of others, you become their prisoner.”

We don’t make changes idly or indiscriminately, rather we look within ourselves to ask ourselves what we feel is fair and just and compassionate. We will make mistakes and in the manner of a Bodhisattva we always try to make them correct when we realize the error of our ways.

This student-teacher relationship is reserved for those who are concerned with "the great question of birth and death", who have a genuine aspiration to awaken, and are willing to exert themselves rigorously in their practice, which would include attending retreats and participating in group practice whenever possible. The first meeting (interview) should be scheduled for at least 90 minutes with subsequent interviews lasting for 45-60 minutes (longer meeting times can be scheduled as required).  In addition to discussing and exploring zen practice as it manifests in the student's life, interviews will also cover the following topics:
There is no standard fee applied to these meetings. Financial compensation is voluntary and left to the student's discretion to offer dana (perfection of giving) to the interviews based on the studen'ts ability to give. Of course, for some, money is not a bountiful resource and accepts any and all forms of donations given to support Do'ans efforts to help and serve. If money is an obstacle to practice giving, dana in the form of assistance, such as donating food and supplies; offering administrative services and other professional skills, can be offered but must be arranged beforehand and at the approval of Ven. Do'an.

Training with Ven. Do’an Prajna means accepting the guidelines listed below, which is intended to make clear the expectations for trainees. Training with Lotus Heart Zen is to make a strong commitment to Zen practice for the benefit of all beings. As a member of our practicing community, this commitment includes the following:
To offer a donation to Do'an Prajna Sabunim: