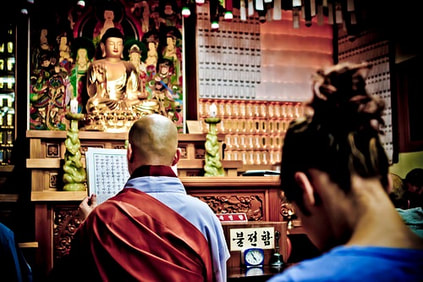 What is the Bodhicitta Gyeolje?

This intensive “binding rule​” practice has opened many minds over the years; however most of us, as busy house-holders in modern life, cannot afford either the time or money to participate in this traditional practice model. Nevertheless, we can create a program that works for each of us, in our own unique circumstances. Although we are not living in a monastic rigorous setting, we can still investigate this matter of finding our before-thinking original nature with complete assurance and dedication. Any environment is suitable for this effort. The whole world is our “temple” and our support for each other is vital, for our lives are quite rigorous.
​     Bodhicitta is a Sanskrit word that means "awakening mind"; it is the mind that moves toward awakening and embodies empathy and compassion. The Bodhicitta Gyeolje is an opportunity for lay practitioners who cannot participate in the traditional Gyeolje, by doing extra practice at home and practicing with others in the community when possible. Participating in the Bodhicitta Gyeolje strengthens our own practice while providing support to our fellow practitioners. Together we draw inspiration and energy from our commitment to practice. In Zen, there are three essential elements to our practice: Great Faith, Great Courage and Great Question. How can this be accomplished, and when will we find the resolve? This program is designed specifically to turn up our practice energy, wake up our resolve and completely cut through all habitual thinking and save all beings from suffering.

In India there are three seasons, Rainy, Cool, and Hot. The rains retreat came about during the rainy season of the year. During the time of the Buddha, monks were attempting to live the precepts very precisely. The first precept is “Not killing or harming living beings”. This included insects that live in the ground. During the Rainy season, when the rain came down, the insects came up out of the ground. When the monks were traveling from one place to another, they couldn't stop from harming the insects that were on the ground. The Buddha was criticized by other religious sects and the town folk so much that he had to put into effect the Rains Retreat so monastics could keep the precept fully. Also, it was very difficult to travel during this time and the Buddha requested the monks just stay put.
The tradition is that each year during the rainy season, the monks stayed close to a town so they could walk on the roads to get their alms instead of walking through the forests. Over time this Rains Retreat officially happened in conjunction with the Asian season from July full moon until October full moon. Gradually, as other geographic countries became involved, where seasons fell at other times, it became acceptable within the monastic rules, that a person could take their Rains Retreat in keeping with their own country as long as they served one retreat per year in this way.

How can I participate?

Fill out the practice commitment registration form below. This form can also be used to register for retreats.

Schedule and requirements for participants