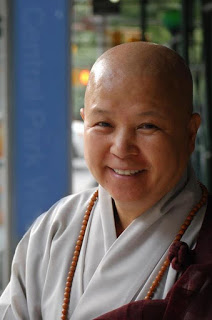 Myoji Sunim first encountered Zen Master Seung Sahn in 1982.  This marked the beginning of her devotion to the practice of Zen Buddhism.  She began training as a nun in 1992. Shortly thereafter, she became the abbot of Chogyesa Zen Center,
becoming the sole religious Korean leader in New York City.  She promoted the introduction of Korean Seon Buddhism by opening a new temple in Manhattan in 2004. MyoJi Sunim’s concept of Buddhism is based on action, emphasizing practice.  She was known for leading intensive, extended retreats and 1000-bows-a-day series. And, in the last 10 years, she has led the Zen classes at Union Theological Seminary. Further contributions to the greater community include her role as chaplain for the Red Cross during 9/11 and serving as president of the International Council for the Celebration of Buddha’s Birthday Lantern Festival. To her, Chogyesa was more than a temple. It grew to become a Buddhist Arts and Cultural center accessible to a broader community. Her mission was to promote Buddhism internationally, to encourage harmony between all religions and to advance Buddhist cultural education for youth. She leaves behind a 17-year legacy as a charismatic practitioner of Zen Buddhism. Myo Ji Sunim, JDPS, passed away on November 4th 2011. MyoJi Sunim was a leader, a mentor, a role model and a pioneer.  Her absence will be felt by everyone whose life she touched.
She will be profoundly missed.

Even as a young child, I always felt an emptiness in whatever I did. When other kids joined a dancing class, I thought, “Maybe that is what I want”. So, I took the dancing class. But it was not what I wanted. Some others tried piano, so I thought, “Maybe that is the way I have to go”. But that was not for me either. Whatever others were interested in, those activities were not my way.

Both my father and grandfather were Christian ministers. The house I grew up in was like a church. But I was never 100 percent into that because everything felt empty. I was always searching for something, nothing seemed to complete me. My question was this: If what people say is true, why do I feel so much doubt? Why do I always feel this emptiness? When I moved to North America, however, I did have a belief system. I joined the Catholic Church. I fell in love. But I still asked myself, “If these things are true for me, why is there still this emptiness?”

Later I met a Buddhist nun and asked her, “What is Buddhism?” She said, “Mind creates everything.” When I heard that, I hit myself and cried, “That’s it!” That nun was the one who taught me how to practice, to bow. Then one day she called my house and said, “There is a great Zen Master visiting our temple. You must come and meet him.” I dropped everything I was doing and rushed right over; that was when I first met Zen Master Seung Sahn.

At that time I was very busy, working long hours every day, so he told me to do midnight kidos. If I just sat, I would fall asleep, so I bowed from 12:00 to 2:00 every night. I was getting by on very little sleep but still I had a lot of energy, I don’t know where it all came from. Today I am not empty any more because of this practice. The emptiness was filled in and things have become clear. This practice is our teacher.

​These days I don’t have money, a car, a house or even hair! But I am no longer empty, it’s fulfilled.
[Raises Zen stick over head, then hits table with stick.]

Some people say that monks and nuns should not cry. I am a nun, but I am a human being, and I am crying because I miss Zen Master Seung Sahn. I miss him in my bones. I will cry; I want to cry. I miss his shout. I miss his laughter. Every time I chant shin-myo jang-gu dae-da-ra-ni, I remember him and it makes me cry. I knew, I’m going to cry on Tuesday. Now the tears come out. In your lifetime, you will have many kinds of problems. At those times, the best thing is to cry out, and then feel better. Maybe somebody says, You don’t have a strong tantien. It doesn’t matter if you have a strong tantien or not. I’m crying anyway. So, join me please.

Also, I’m doing bulsa practice, which means meaning making a temple. In all these many, many years, Zen Master Seung Sahn always helped me stand up right this moment. When I was at Hwa Gye Sah in Seoul, he asked me several times to take the abbot’s job at New York Chogye Sah temple in Queens. Each time I said, Oh no no no, no abbot’s job for me—I’m too old a nun! I have to practice and get enlightenment. Finally he said, That’s the point! That’s your togul.

Q: I grew up in Queens. So, I ask you, Queens and Manhattan, are they the same or different?
MJSN: You already understand.
Q: But I ask you.
MJSN: In Queens the sky is blue, in Manhattan the sky is also blue.

Q: If there wasn't Buddhism, what religion would you practice?
MJSN: You already understand.
Q: No, I'm asking you.
MJSN: The floor is yellow.
Q: Thank you for your teaching. Good religion.

Q: We have known each other a long time. But still I don't know one thing. In Korea there is a huge painting, bigger than here, and there's many bodhisattvas and Buddhas. I want to know which one is you?
MJSN: You ask me a question and I answer you.
Q: Thank you for your teaching.

Daniel Marrin is a New York freelance journalist, and member of the emergent Christian group Transmission in New York.  His writings, and other work, can be found online at danielmarrin.googlepages.com.