The Brahmajala Priest vows are intended to be universal. They are both rigorous and demanding and they are also ultimately liberating. Because these vows ask much of the person who is receiving them, they must be studied and clarified carefully by those who are called to them. In greater detail, the five vows are: Brahmajala ordination entails a lifetime commitment to these vows. Priest candidates need to personally embrace these vows, investigating their internal motivations and possible limitations within the guidelines that the vows provide. Priests make the ultimate visible commitment to the teacher, the teachings and practices of the Sangha. Priests have the additional responsibility to perform some of the advance Buddhist ceremonies, and are encouraged to enter the service of the community in an interactive role. The first requirement is that Priests should dedicate all of their extra energy to helping the Zen community by volunteering in every capacity required there; and must have the approval of the Zen center’s Guiding Teacher. 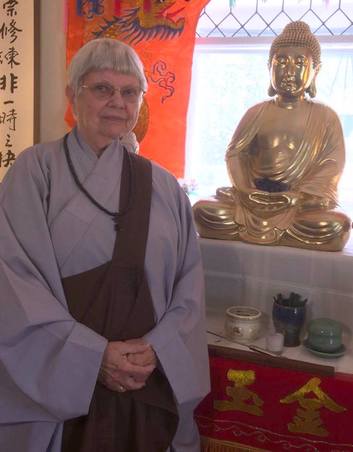 Rev. Anwol Devadipa (Mary Ann Marston) has explored many spiritual practices during her life. In 2009 she joined the Shinnyo-en Buddhist Temple in White Plains, NY and studied there until she moved to Central New York state in 2013.
She found the Lotus Heart Zen sangha in 2015 in Oneida, NY, where she quickly became an active and devoted member. In October of 2015 she received Anagāriya precepts, and honored her vows through tireless effort and assistance to the sangha. On June 4, 2016 she received vows as a Śrāmaṇerī with the Five Mountain Zen Order, and received full ordination on July 15, 2017. She currently is Abbot and serves as the Communications Director for Lotus Heart Zen.
Rev. Anwol is a native of New Jersey and a retired geriatric nurse. She spent 10 years with the American Red Cross as a Disaster Services Co-Ordinator traveling througout the United States helping attend to the needs of those in need. She was at ground zero, following the terrorist attack at the World Trade Center in 2001, coordinating relief efforts.
She now lives in Sherrill, NY with her husband, Robert. Rev. Anwol is currently under the guidance of Ven. Myohye Do'an.
Rev. Jeonchan: bio forthcoming